You are here: Home / KV School Admission 2020 / Reservation in Kendriya Vidyalaya Admission for Class 1 as per 2020-21 Guidelines

Reservation in Kendriya Vidyalaya Admission for Class 1 as per 2020-21 Guidelines for SC, ST, OBC 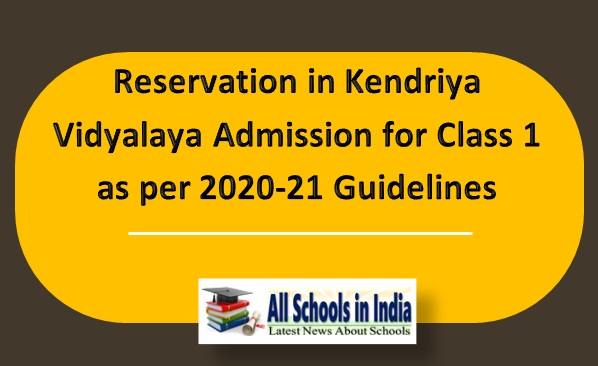 3% seats of total available seats for fresh admission will be horizontally reserved for Differently Abled-children as per the provisions of RTE Act, 2009. Read in conjunction with Persons with Disabilities (Equal Opportunities, Protection of Rights and Full Participation) Act, 1995.

Automatic admission of children in the Kendriya Vidyalayas on the basis of transfer certificate issued by the CBSE affiliated schools run by Armed Forces (Army, Air Force, Navy) and Para Military Forces i.e. CRPF/BSF/ ITBP/SSB (Sashastra Seema Bal)/ CISF/NSG and Assam Rifles will be entertained only if the parent has been transferred to that place or has desired to settle at the place after his retirement, or transferred to some non-family station or posted in Naxal affected areas and choose to keep the family elsewhere.

It is clarified that the above provisions are only for the wards of Defence personnel / Para Military Forces i.e. CRPF/BSF /ITBP/SSB (Sashastra Seema Bal)/ CISF/NSG and Assam Rifles viz. sons & daughters only. This will not include the grandchildren of Defence personnel. Provisions of KVS admission guidelines including the eligibility criteria for age and marks/Grades will be followed in letter and spirit. Also, the fee including VVN is to be paid from the month of admission of the child in the Kendriya Vidyalaya regardless of the fact that the fee for succeeding months have already been paid in the school from which TC has been issued for admission to KV. TCs issued by the CBSE affiliated schools of Defence Ministry/Deptts/Authority will be endorsed by the concerned Deputy Commissioner of the region where admission is sought.

The policy of automatic admission of pre-primary students in Class-I has been withdrawn w.e.f. session 2008-09. Now all admissions in Class-I shall be treated as fresh admissions and shall be dealt with as per rules in vogue.